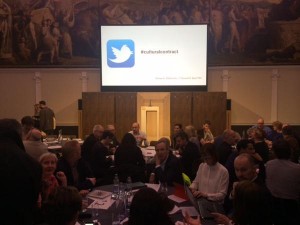 (From @ace_national twitter stream with permission. Thanks to Alison O'Hara for pointing me out!)

I promised more on the RSA’s draft contract between government and the arts and cultural sector after the launch debate event this week, so here we go, trying to reflect some of the conversation as I heard it, and some thoughts of my own. Get yourself a brew, it’s not as short as I’d like. (Not enough time!)

I guess the first thing to say is that the room was divided on the approach, and few felt it was close to being right as yet. This is understandable, but we were asked by Vikki Heywood, RSA Chair and chair of the Warwick Commission, to vote on a show of hands whether we supported it, yes or no, to which the answer was, I’d guess, 35% Yes, 65% No, certainly no closer than 40:60. The trouble was this was the wrong question – like saying ‘Do you want to publish this first draft, yes or no?’ to which the answer is almost always ‘No.’

Once we got over that surprising clumsiness, the discussion in the room seemed to reflect the scepticism of the table I was on. There is potential in the approach, seemed to be the consensus, but only with certain provisos. These actually added up to quite a list, and a contradictory one at that. The main concerns related to the following areas: 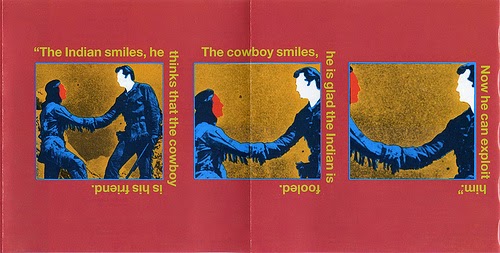 (Image from cover of one of the best albums ever, Entertainment! by Gang of Four.)

So, if there was a conclusion, it was that more work would be needed to make this a more precise document in order for everyone to really know what was being signed up to – on both sides, if this has two sides. Some clearly felt that would be too much work. To use an image of Ian McMillan’s on rewriting poems, this draft needs far more than its tie straightening, it may even need a new outfit and better shoes.

I wonder if the clues to a next draft were not in Matthew Taylor’s reference to the Compact between government and civil society organisations in his introduction, and the back and forth linguistic slippage from contract to compact in the discussion, and even Matthew’s blog introducing it. This is a now long-standing, powerful Compact cited in judicial reviews etc – so respected by its sector bodies and governments that the Coalition retained it despite their general clearing out of commitments by New Labour. (I had to laugh-to-keep-from-crying that one of the shared outcomes they thus commit themselves to is ‘an equal and fair society’, but let’s leave that for now.)

Contract and compact both mean agreement, but contract suggest more the legally enforceable supply of goods or services whilst compact suggests more a shared understanding of principals or behaviours – a covenant, to quote Webster’s’ definition. Generally it seemed there was more interest in this than something that routed back to exchanges around funding, as that had more limited direct relevance, although I’d share the view that having a clear, understandable statement of ‘this is what it means to take/for us to spend public money’ would be beneficial on all sides. I also saw some potential for parts of the draft to be developed as a kind of statement of ‘professional standards’ for parts of the sector but I think that might be a red herring for the case at hand.

The Compact is a revealing comparison. Others will be better placed to talk about any limitations, but there are a number of things it has the draft contract does not. Firstly, it is shaped around shared outcomes. Laura Sillars from Site Gallery posed the question in her speech ‘How do you negotiate with people who don’t share your passion?’ Well, my answer would start with ‘Find out what they are passionate about.’ Only when we acknowledge the priorities of government as genuine, can we work out how to find shared ground, shared outcomes. Without that you're not negotiating, you're selling. (This process of finding shared purpose is often more possible locally, I suspect, although the amount of people who talk with disdain for local government continues to bother me.) I wondered whether we also need to see expressed, and understand, the ask and offer from Government to the arts for the contract to be meaningful, but shared outcomes is a better way to do this.

(One of the good things about looking at shared outcomes is it forces people to ask ‘how does this commitment fit with our values and purpose?’ rather than ‘is there money available for our work?’ I don’t have shared outcomes with many areas of ‘cultural diplomacy’, for instance, so you’re unlikely to find me working with Chinese government or UAE royal families no matter how clear the ask/offer.)

The Compact then has a set of commitments and undertakings, which is for me much more positive language than that of ask and offer. It suggests shared purpose rather than supporter and supported.

This brings me to the last little debate I want to mention. (There were lots of other points of course, look at #culturecontract for a flavour.) Some people may be uncomfortable with any kind of agreement with government signed by whoever on behalf of a sector as they don’t like the government of the day, or even any day, or those bodies who might sign it. Some may think thing government = state = a bad, coercive. limiting thing. Some people felt the big ‘contract’ needed to be between the sector and audiences – or the people or the public, the terms slipped around a little. This seems hard to do at sectoral level – although individuals organisations might helpfully be clearer about their ‘contract’ with their own audiences.

But an expression of what set of public, shared outcomes we want from a cultural sector that draws on public investment, support and legal frameworks – thus potentially encompassing the whole cultural and creative industries sector - could be possible, and would provide a set of principals and standards for any government to navigate by. It could include undertaking highly relevant to artists and microbusinesses – eg by committing to planning taking into consideration issues that affect cultural activity. (I’m thinking of debates about gentrification pushing out artists which often come down to planning decisions.) These could then be mirrored or adapted locally, as the Third Sector Compact has been. For me this would make clearer the outcomes of culture as a public good, and some of the key things needed to make that possible – from funding to intellectual property law. I’ve not included tax breaks as mentioned in the draft as I’d put a line through that – as one speaker said, ‘tax wealth not ambition’. Enough collusion with tax breaks already.

The draft was described as ‘a straw man’, so although I suspect some at the RSA were a bit surprised at the reaction, hopefully this kind of response is helpful. Someone may need to borrow that other straw man Worzel Gummidge’s Thinking Head for the next draft. (No link between Worzel's head and Thinking Practice by the way!)
#artsfunding ACE arts policy coalition conferences DCMS ideas resilience RSA