Give me sand before gold, sea instead of champagne 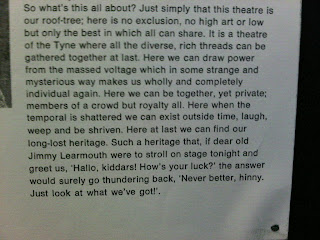 It's been quiet on here due to holidays and a lot of post-holiday work. This is a quick one to get back in the swing. The photo above was taken in the lobby of Northern Stage in Newcastle, and is part of a page from the programme for a production of Barthomlew Fair in 1970, written by Sid Chaplin. (It's part of a really pleasing exhibition of old programmes and poster marking their 40th birthday.) As so often, Chaplin, who was chair of Northern Arts for some years, puts things both simply and evocatively. It struck me as a more powerful argument for the added value of the arts than anything else I've read recently, even though it doesn't suggest government investment is about profit in some peculiar equation necessary because everything in life is a commercial transaction. Or do I mean because.
For those reading this on their crackberry without photos, hopefully these sentences will make you want to click through:
'Here we can draw power from the massed voltage which in some strange and mysterious way makes us wholly and completely individual again...Here when the temporal is shattered we can exist outside of time, laugh, weep and be shriven.'
If you don't know his work, Sid Chaplin is well-worth catching up on - he was in many ways a forerunner of the Northern Kitchen Sinkers, Sillittoe, Barstow et al. Some years ago, I was writer in residence in Shildon in County Durham, where Sid Chaplin was born, and alongside some texts by myself, had a quote from his great novel The Day of the Sardine carved 30 foot long by the library. It reads: ‘Give me sand before gold, sea instead of champagne, and all the common things like air, and wind, and clouds, and people.’ Which is actually worth repeating, in bold:
‘Give me sand before gold, sea instead of champagne – what’s it like anyway? – and all the common things like air, and wind, and clouds, and people.’
#artsfunding Sid Chaplin theatre writing