5 Doctors, and the axe paradox 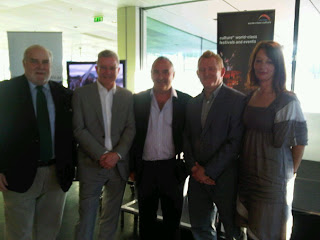 Some years ago, in a late night conference conversation in a Bulgarian night club, someone from an arts organisation asked me how come the Arts Council in the North East was so good, when their region was – well, not. (They put it rather more harshly, but drink had been taken and I'm sure they didn't really mean it, and that anyway they were mistaken.) The rather poor photo above was taken at Andrew Dixon’s leaving do recently and illustrates, in a way an answer about the North East, from which I want to draw a general lesson. (Andrew has just left Newcastle Gateshead Initiative and the North East to become the Chief Executive of Creative Scotland.)

My answer at the time was about Andrew and how he'd provided continuity of vision from his predecessors, and I only want to alter that slightly here, with the experience of having taken over from him, and then recently handed on myself. What's been achieved in the arts in the North East over the last 20 years has been achieved by consistent leadership, in which Northern Arts and then Arts Council England, North East has played a key role. (The local authorities have also been central, as have some fantastic arts organisations and indeed some private sector backers.) There has been enough consensus to have a shared mission for a prolonged period, which has given us the platform to really change the region. We have provided a confident and persistent vision, conversation and relationship for people. (Even if they didn't agree, they generally knew where we stood.)

When we've all been together in the past I've compared it to the rare Doctor Who specials where several Doctors come together. I looked at the photo above, and saw that in a new light. It had slipped my mind that what you have is a kind of chain. Working from left to right in the photo, Alison Clark-Jenkins was one of my Directors, I was one of Andrew's, he was Peter Hewitt's deputy at Northern Arts, as Peter Hewitt was to Peter Stark. To some this might suggest an insularity, a commonness of approach - and I am very aware that whilst many would praise our work, there are other views, and some hoping for big changes. I do feel, though, that it has generally been a positive thing, as we have each taken core elements of vision and added our own style and take. We are all very different as people, although reflecting now I can see some traits in common: energy, passion and a willingness to argue strongly for what we believe in, even when that's awkward, for instance.

The changes we've brought to our predecessors' vision and ways of working has been as important as the continuity though - though perhaps only because it is allied to some continuity. I am reminded of the paradox of the axe: if I change the handle on my father's axe, and my son or daughter changes the blade when I pass it on, is it the same family axe? (This comes to mind because of Gary Snyder's poem 'Axe handles', I think, though he uses the image slightly differently. Read the poem here.)

This is also a view enabled by hindsight. Although there is a succession here, it could have been very different, and maybe even better people would have come in. But as succession planning becomes a much more common thing for boards to do, it is perhaps time to think through the benefits of different models.