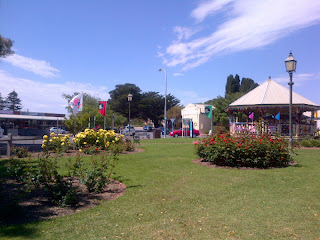 I was lucky enough to attend the whole of the Kumuwuki Regional Arts Australia conference in Goolwa – a small river mouth town about an hour from Adelaide, in the traditional lands of the Ngarrindjeri people. Goolwa has been the Regional Centre of Culture throughout 2012, and there was an active contingent of local volunteers around the whole time, many of whom I suspect were taking a break from yarn-bombing the town’s benches, fences and bandstands as seen in the photo above.

Alongside the traditional conference programme of high quality keynotes from across the globe – Bill Shannon, from the US, gave a great opener for instance – though I felt making his entrance on crutches and skateboard was setting the bar unfairly high for the rest of us! – there was a lot of artistic programme. This, again, was really high quality. I especially enjoyed If There Was A ColourDarker Than Black I’d Wear It, a mix of immersive theatre, dance, projection and site-specific experience in various parts of the town, connected by bus – and I Met Goolwa, a charming piece by the Australian Bureau of Worthiness, who had criss-crossed the town for a week talking to people and asking the question ‘What makes your day worth it?’. They made great use of 2 OHPs, and built a raffle into the show, which I rather liked. The locals in the audience obviously enjoyed it too. (Yes, that word charming is a dangerous one. One of the company told me they had to make ruthless use of a twee-ometer. It was good to see a piece that was positive and, well, kind in the best sense of the word. One can get sick of art that equates heartlessness with rigour.)

One of the things I was doing in my head was trying to understand the Australian conversation, a task made more complicated by the seeming common language. Regional, for instance, is mainly used in the context of outside the main cities, and cover huge distances compared to the regions we might talk about in the UK. (I had joked to a few people before I left that Australia was a long way to go to be allowed to talk about regions, given the word is pretty much verboten these days in policy terms in both arts and wider frames. The Australians I’ve spoken to find that unbelievable – and the Arts Minister who addressed the conference is also the Minister for Regions.) To save this turning into a lengthy post I thought I would give a lightly annotated list of three kinds of words, as follows.

Community cultural development – there is a whole ‘CCD’ practice in Australia, which combines community and participative practice with what we might find in rural touring. It is widely debated and accepted as a field.
Country –the notion of ‘country’ as opposed to town and city is one I can’t claim to fully understand or articulate. It obviously stems from the physical nature of Australia, and some of its troubled history of the taking of the land from the traditional indigenous owners and their ancestors, and has a ‘rural’ connotation, but is something more than that.
Lands and waters – one of the most moving keynotes was by a Ngarrindjeri elder Tom Trevorrow, who talked of the importance of his people’s lands and waters. It made me sad it would be hard to do that at home. I did quote Sid Chaplin in my keynote as a result.
Regional – if I do hear the word regional in England, it is mainly to lament the passing of the regional agencies and ‘policy space’. In Australia it is a live and vibrant conversation, as mentioned above. (Today’s announcements give me some other thoughts on regions, but that’s another subject.)

Words I didn’t hear I’d have heard at home

Excellence – although there is apparently a debate about what excellence might mean, and a shift at Australia Council level towards greater emphasis, this was not the subject of debate in the conversations I heard.
Great art – although the artistic programme was discussed and debated by people, there seemed less of a focus on ‘great art’ as the only suitable driver for public funded engagement in a regional setting.
Young people – there seemed to be little focus on young people as creators, or a central to the participation/engagement of regional arts organisations. Looking at some of the brochures I picked up, there certainly is interesting looking work, and one of the projects had involved local young people. But it didn’t feel as present as either burden or mission as it might be in England.

Philanthropy – this is a coming policy direction for the Australian government as in UK, and there are similar fears in regions. In some parts of Australia, however, the mining boom is creating interesting dilemma for arts organisations over what to accept from whom
Cuts – some states have had changes of government recently with drastic effects on arts budgets. In conversation I’m told the government basically sees itself as guardians of the national budget. It got flack last week for reducing its predicted surplus. That’s right, surplus.
Change – both nervousness and excitement at the changes happening, probably more of the former.

(I should caveat all of the above by saying this topics may have been discussed elsewhere, in other panels and sessions, and in conversation when people weren’t being nice to the Englishman. I should also say that sometimes words not being used can be a sign of the thing being taken as read, felt as self-evident, rather than it being unimportant or even unknown.)