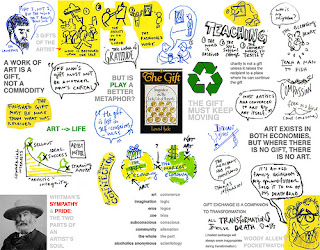 I'm a little late on this, as it's been going viral for a few days, and that became the story in the Guardian the other day, but better late than never I always say...

Philip Pullman's speech against library closures , which you can see in full on the False Economy site here, destroys not just the case for closing libraries, but the nonsense of the idea that volunteers will take over key services, and the implicit and pernicious competition between groups and communities this will involve. I've tried one a few occasions to describe how this coalition is bringing everything down to markets and the fetishing the choice to pay. But Pullman captures this better than I ever have (hardly surprising, really) with the phrase 'market fundamentalism'. That feels about right for what's going on: the simplistic sweeping away by ideas which refuse to accept doubt.

I need to think through how one avoids flipping away from this fundamentalism into another which simply demands public money to provide good things for good people. I'm thinking of business modelling which looks at value propositions and talks of customers, even though that word has always been an awkward fit. You should do things for or with someone, I intuit, not simply because you want to. Perhaps the answer lies somewhere in Lewis Hyde's thinking in The Gift, and the notion of potlatch or gift economies. As he puts it: 'it is not when a part of the self is inhibited and restrained, but when a part of the self is given away, that community appears.' Perhaps if we move from the idea of tax as a purchase (next person to say I own a bank gets it!) to one of a gift to the community in which one gets something back in a reciprocal rather than consumer relationship, that may help.

Anyway, while I ponder that, I suggest you read Pullman's speech, and pass it on.