Five a Week 13: Some Things to Read & Think About 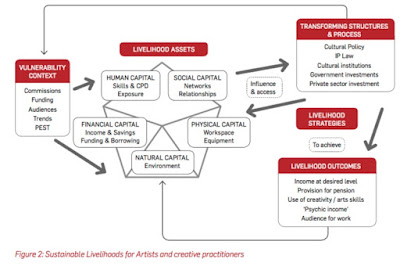 News that arts graduates earn less than graduates in other subjects might easily be filed under ‘No S*** Sherlock’, but the data described in this report matters for several reasons. Amongst other things it puts some perspective on the cultural sector’s more jingoistic use of broader ‘creative industries’ stats. If we’re so important how come we’re so badly paid? I find the ‘fastest growing sector’ argument frail anyway. Rate of growth doesn't necessarily tell the whole story about potential 'return' per pound or hour invested, does it? Let alone the full value of each unit of growth - are all jobs equal, is every £ of GDP equally welcome? I wouldn't base an argument for cultural funding on growth rates, especially as growth for growth’s sake may be more problem than solution.

I’m also interested in the evidence that attending so-called elite universities leads to higher earnings, which is described, rightly, as ‘yet more evidence that prestigious institutions should be redoubling efforts to draw in less affluent students’. It begs an additional question about the recruitment and reward policies of the cultural sector, where managers – people - make choices and may, who knows, have an informal league table of universities in mind when looking at cvs. Is it time, I wonder for not just name-blind recruitment, but 'university-blind' recruitment?

The article also outlines the limitations of the data and the risks involved in how it might shape policy. As the ever-quotable Dr Dave O’Brien says ‘the function and purpose of education should not be measured just in wages.’ The same is true of culture.

2. LESSONS FROM LEO: TIME TO THINK DIFFERENTLY ABOUT SUBJECT FUNDING

This article by Andrew McGettigan looks at the same data and comes to some similar conclusions. It also considers, though, the potential impact on funding of Creative Arts and Design subjects in HE, and it’s not a reassuring read. As he concludes: ‘The LEO indicator light is blinking to tell us that there is a problem, but it will require some courage to lift the hood. LEO needs to be corralled and directed productively, away from crude interpretations … The alternative is that a stroke of an administrative pen or swings in demand could leave the Creative Arts – and all of us – with a diminished future.’

McGettigan draws attention to calls to move some parts of HE provision into FE – with creative arts and design likely to be targeted. This would potentially damage universities who are, we should not forget, increasingly interwoven into the cultural sector at all levels, not just teaching, especially in places where they are big employers, developers and civic players. He adds ‘Lobbying strategies need to do more than point to the size of the creative industries, since those £80 billion figures bandied about include software design, advertising and a range of large cultural organisations that do not predominantly fill their posts with Creative Arts graduates.’

3. COLLABORATION NO LONGER A DIRTY WORD FOR THE SELF-EMPLOYED

One of the limitations of the LEO data is the exclusion of self-employed graduates, although this may not make the picture much more rosy. The RSA has just published a really interesting paper on the way self-employed people are increasingly coming together to help each other – often providing things other look to the state for, of course, such as sick pay, so this is not always, perhaps, a simple ‘good thing’. Coming together to create local or sectoral ways to take risk out of being ill or late payments could be ever more important as more people choose or are pushed into self-employment. My own experience of this now is very different from when I freelanced in my late twenties-early 30s, a much ‘riskier’ time of life in many ways. I don’t think that’s because I’m better or cleverer than I was then, though, and greater mutuality would have helped even more then than it might now.

Meanwhile, over in Ireland, the government has worked with writers’ and artists’ organisations to recognise that ‘actively looking for employment’ includes artists who are applying for commissions, exhibitions, curatorial visits, outreach work and other related opportunities, when people are seeking social welfare. As noted, it’s not a panacea, and looks limited in scope, but it at least recognises the needs and status of individuals.

This blog from 2014 marked the publication of The Art of Living Dangerously, which I co-wrote with Shelagh Wright, then of Mission Models Money, Natalie Querol from Exchange/The Empty Space, and Sarah Colston then of nef. The themes of sustaining livelihoods, pooling risk and utilising space seem even more relevant now, as does the framework shown in the illustration at the top of this post.