Five a Week 8: Some Things to Read & Think About 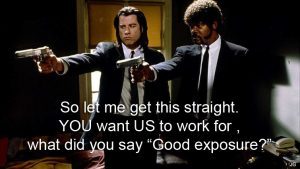 1. WHY WE NEED TO TALK ABOUT GOOD WORK

Matthew Taylor of the RSA gave his annual lecture last week, around one of the RSA’s current big themes: ‘good work’. This relates to the work being done by Taylor and others at the RSA around self-employment and the case for Universal Basic Income. There’s lots to chew on in here, and my brain kept flicking back to all the worst bits of work I’ve had to do: carpet warehouse finger-ache, peeling sacks of carrots, endless, pointless meetings. (Actually, I enjoy peeling lots of carrots at a go.) I don't think Taylor is saying no one should do those things, but that good work puts them in a positive context. I’ve work to do, so can't unwrap further, but do have a read.

2. THE GIG ECONOMY AND THE WELFARE STATE

1 in 5 people in the UK do not have a conventional job. 3 in 5 of those work in professional, creative and administrative fields. Diana Coyle argues here that although some employers or platforms may use this shift to avoid their proper responsibilities, the shift also demands more imaginative responses in terms of welfare reform. If self-employment is an increasingly common positive choice – as it is currently for me - rather than an employer-imposed ‘dodge’ then the ‘social contract’ needs some rethinking. This thinking is sadly a bit lacking in the Labour promise to assume everyone is an employee unless proved otherwise, which I suspect will be a real pain in the backside for artists, writers and cultural workers. (To be clear: it’s an inconvenience I'd be very happy to take to get a different government, and there is a good emphasis on issues like artists' pay/working for free in the manifesto.)

‘The gig economy’ is a term, a metaphor, drawn from the arts, of course – specifically music. UK Music have produced their manifesto, adding to the list (which James Doeser has usefully compiled here, by the way). It is amazing to me that none of the ‘cultural manifestos’ I have read so far have referred to the benefits and welfare systems, either in relation to artists or workers, or indeed to potentially excluded audiences or participants. The focus is in making positive statements and appealing for support. Sadly, this is now more likely to include asking for tax relief schemes – here it's to attract people to record in the UK - than it is to argue for a reformed system that works better to enable creative careers, especially in their early stages.

There’s good stuff here too, I don't want to pick on UK Music especially. I don’t know, I’d just like the sector to consider how phenomena like the benefits squeeze, sanctions, Universal Credit, the bedroom tax, etc are cultural issues too.

There’s lots to make me twitch here too, not least the title, but at least NCVO mention unemployed people once and get away with it.

5. GOVERNMENT REVIEWS ARE UNSATISFACTORY AND CONTRADICTORY

I half-promised a blog about the DCMS ‘tailored review’ of Arts Council England. I even half-wrote one, but the more I looked at it, trying to find something more interesting that 'get a bit better', the more a fatal ennui gripped me. Happily, James Doeser has written something with a similar implied sentiment for The Stage, so I can just point you to that.

5+ ARCHIVE CHOICE: NOT BOLD, NOT NEW, BUT WORKABLE

This is my reaction to last year’s Culture White Paper. The blandness of that document shapes, for better or worse, the review of Arts Council. It may also, indeed, explain the silences within the cultural manifestos.
ACE arts DCMS election self-employment welfare work