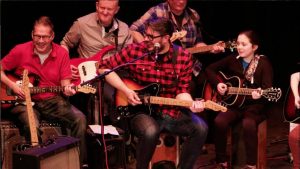 1. STORIES FROM THE HOUSE BAND

This is a brilliant fanzine put together by Maddy Costa to record some of the stories emerging from Unfolding Theatre’s fantastic Putting the Band Back Together project. I should declare an interest as I’m on the board of Unfolding, and played in the House Band when the show came to Stockton. So I can vouch first hand for the full-hearted joy of this Culture Award-winning project, and the patience of Ross Millard with rhythmically-challenged bassists. Ross says one of my favourite things in this fanzine, which I like as it sums up something I think I’ve always felt as a writer:

‘...it also makes you realise that some of the, what I perceive to be, little stumbling blocks in my ability, they don’t really exist. They’re almost your identity in your playing, something that characterises how you play: you can’t play everything all the time, if you could you wouldn’t really be you, would you?’

2. A WHOLE NEW WORLD: FUNDING AND COMMISSIONING IN COMPLEXITY

Reading this report, co-authored by people from Collaborate and Newcastle University and funded by Big Lottery Fund, made me think again how old-fashioned, olde-pull-a-lever-world, the recent DCMS review of Arts Council felt. The co-authors include Toby Lowe, a colleague back in the day at Arts Council North East, where one of his main roles was to point out when things were a bit more complicated than we might have liked to think. This report also does that and would be useful reading for DCMS, although it is not a cultural sector funding report at all. It argues for a new paradigm to cope with complexity, and usefully resists simplistic recommendations. It argues for funding for system health, based on trust and recognition of intrinsic human motivation and continual learning. Although it doesn’t say ditch ‘risk’, one might wonder how that sits with monitoring regimes based on risk assessment, as a sample question. There’s lots more in here worth thinking about.

There’s loads in here too, coming out of the World Cities Culture Forum and I’m nearly out of the time I have for this week’s blog. I will, though, quote some stats that particularly struck me, with a question:

• ‘In United States cities, culture funding is dominated by private giving. Outside of the US, with the exception of Tokyo, no other city has more than 19% of total funding from private sources.’ Why, then, does UK policy increasingly expect cultural organisations in hard-pressed small towns to increase their funding from private giving?
• London takes a greater proportion of the national culture budget than any other city listed, except Stockholm. National level funding makes up a greater proportion of London’s overall funding than all other cities listed bar Brussels. (70%, next highest being 57%.) Struggling to find the best question here, I will go for the coach’s standby: how does that make you feel?

Some light relief. Does what it says on the tin.

5. ARCHIVE CHOICE: HOW FAR UP THE LADDER DARE WE GO?

This is from the deep archive of Arts Counselling, which still orbits the interweb like a piece of space junk. In fact it’s from exactly 8 years ago and talks about collaboration, interventions and activism within systems. I'm a bit more suspicious of 'ladders' than I was then, but the list is still thought-provoking.
#artsfunding 404 change complexity my shallowness Unfolding Theatre