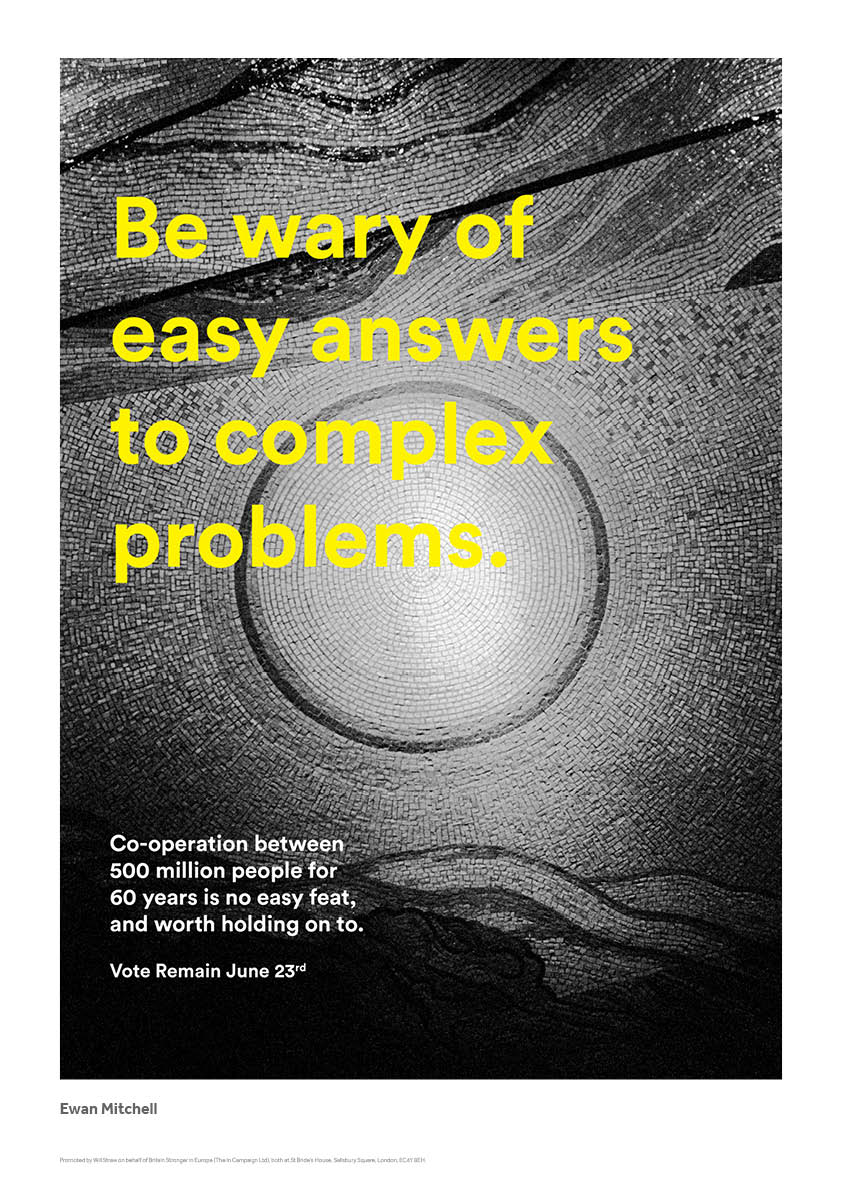 Like many people I’ve found the EU referendum process a depressing and dispiriting one that illustrates, again, the brokenness of our political culture. Self-righteousness, lack of empathy and perspective, inability or unwillingness to listen or imagine, disregard for uncomfortable facts, disdain, willingness to treat opinion as fact and fact as mere opinion… Despite being absolutely and firmly in the Remain camp these have felt like they’ve been all around, some coming from all sides, albeit not equally.

The worst aspect of what has not so much been a campaign as a car park row has been the nationalism and xenophobia  behind much of the Leave rhetoric and on the ugly surface of some of it. Not everyone who wants to leave is on the right, of course, certainly not on the nationalist right, but those who are see this as their best opportunity since the 70s. (When violent fascists were a common danger on the streets or at gigs, let’s not forget.)

My reasons for being IN include lifelong Europhilia brought on by studying Modern Languages’ before I’d been anywhere more ‘foreign’ than Barry Island, and a belief that collaborative internationalism is more constructive than competitive individualism. I see – and experience – migration as a good thing, certainly more helpful than its opposites. I don't see how the EU has developed as entirely positive, but no governance format is going to be in the kind of economy/society we have. The alternatives seem at best very uncertain, or where not uncertain, hugely negative. This is definitely the case in relation to the arts and culture where I work, both practically in terms of loss of EU funds and spiritually in terms of intercultural creativity. I have even forgiven the EU for the hoops of fire endured over the years in raising money from it – as the transformative effects in the NE massively outweighed any irritation.

Given the potential losses it struck me last week that what we are in danger of seeing is a kind of law-abiding riot by referendum. People who feel unheeded, who feel their grievances  are belittled, are in a mood for some destructive release, even if it does leave their neighbourhood battered, with damaged businesses, and with a hefty bill for the clean up. I even started to write something along those lines, almost breaking a silence inspired by that feeling of depression, of not wanting to add another pointless voice to the noise.

By the time I got on a train to London on Thursday, though, the MP Jo Cox had been so tragically killed and I spent most of the trip either in a daze or thinking of the poems of Goran Simic. Goran is a Bosnian poet who was in Middlesbrough recently, as part of the hugely internationalist T-Junction Poetry Festival. (I help on the committee and mc-ed the reading Goran was part of.) His ‘New and Selected Sorrows’, published by Smokestack, who also published my last book I should (proudly) declare, is an amazing and horrifying set of poems flowing out of his experience of the siege of Sarajevo. How does a civilised country slip into horror? As I read about Jo Cox on that train, holding back tears at the mad waste, I could not hold back an irrational (irrational? please say it’s irrational) fear about England. What genie has been let out of the bottle by this unnecessary referendum? Is this John Lydon's words 'No future in England's Dreaming' given horrible form 40 years on?

But I also feel that positive action has to be part of it too, though I don’t know what. Some people have suggested some new form of music or arts platform against racism and nationalism, citing the example of Rock Against Racism and the Anti-Nazi League in the 70s and early 80s. I’d be happy to put my flimsy poems towards that, though they are not what’s needed. I was heading to London for the opening party of the new TATE Modern – in some senses it felt hugely irrelevant, in others positive, and most of the conversations I had that night touched on people’s worries about the atmosphere around the referendum, as well as the outcome.

Culture has to be part of the solution, whatever happens on Thursday. I’ve had some lines of Greil Marcus in my head a lot lately, even before the killing of Jo Cox, something he wrote about the blues singer Robert Johnson: ‘“It is not the simple presence of evil that is unbearable; what is unbearable is the impossibility of reconciling the facts of evil with the beauty of the world.” Sadly what is unbearable must be borne so it can be changed, and culture has a role in that.

I am also reminded of the end of Auden’s sadly immortal poem about the start of World War II:

All I have is a voice
To undo the folded lie,
The romantic lie in the brain
Of the sensual man-in-the-street
And the lie of Authority
Whose buildings grope the sky:
There is no such thing as the State
And no one exists alone;
Hunger allows no choice
To the citizen or the police;
We must love one another or die.

Defenceless under the night
Our world in stupor lies;
Yet, dotted everywhere,
Ironic points of light
Flash out wherever the Just
Exchange their messages:
May I, composed like them
Of Eros and of dust,
Beleaguered by the same
Negation and despair,
Show an affirming flame.

So now my voice says I shall be voting to Remain, and I hope you do too. I doubt that will change any of my reader’s views, but just in case there are more Eurosceptics out there than I suspect, and for all its tiny effect, I decided to share that here. I’ll be continuing to commit my non-Thinking Practice creative work to this area this year, whether it turns out to be or do any good or not. All ideas for other positive actions welcome.

PS: I want to say it's not so much I think anyone needs to know my thoughts on the referendum, but I needed to get these thoughts out of my head. Thank you for maybe being there.