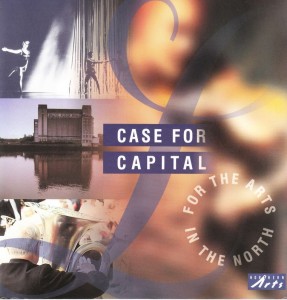 North East England’s Case for Culture, which I wrote about yesterday, was at least partly inspired by the example, some might say the myth, of a 1995 document produced by Northern Arts, the Case for Capital. This set out what the North (which included Cumbria at that time) wanted to do with the lottery funds about to come on stream from the national Arts Council. It had come about from regional partnership and survey of ambition, in a similar way to the Case for Culture. It had a vision and a set of arguments, and some specific asks of arts organisations, local authorities and the national funding bodies.

Funnily enough, when the North East Cultural Partnership steering group were first thinking about the Case for Culture, they wanted to look back at the Case for Capital, but we found it hard to get our hands on a copy. There were certainly none online to be found. So I’m sharing it here, in case it’s useful, instructive or just interesting for anyone who was curious about it when they saw it mentioned in the new Case for Culture. These are scans provided by David Powell who worked on the Case for Capital for Northern Arts – thanks to David for that.

Northern Arts no longer exists of course so hopefully no-one will object to me putting it here as a public service. (I was a member of the Senior Management Team when Gerry Robinson merged Northern Arts into Arts Council, so I feel ok sharing it, although I should make clear I wasn’t there when this first Case for Capital was developed, so take no credit or blame at all for it.) Here are the links, with the full report split into three for reasons of file size:

Hindsight makes The Case for Capital a fascinating read, at least for the likes of me. One could spend a long time discussing the things that happened, the things that didn’t, the things that shifted shape, the things that turned out to need, let’s say, a bit more time and support than anticipated. One could no doubt critique it in all kinds of ways, especially with the benefit of hindsight. (Some of the gaps were filled in a subsequent second Case in 2000. If anyone's got a copy of that, do let me know.)

Narrow your eyes and you can see a slightly different region, a range of alternative futures, as if in some weird arts policy-reflecting sci-fi novel, where there’s no Sage Gateshead but a Regional Music Centre in Newcastle for instance, leaving a very different Quayside. But what strikes me is how much of the inspiration of the early 1990s have been delivered in some form.

That, and how playing the violin must be good for you... Compare the picture of Bradley Creswick below with the one on the Chronicle website this week, one of a set of rather beautiful photographs by Andy Martin of the musicians of the Royal Northern Sinfonia, just some of the beneficiaries of the cases for culture made in the North East over many decades. Cover star Mike McGrother, now more active in Stockton than ever, hasn't aged too badly either. 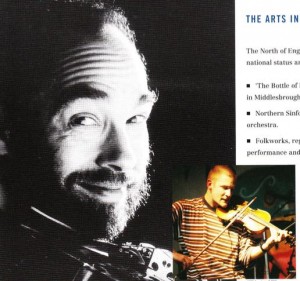