Audiences and what they value 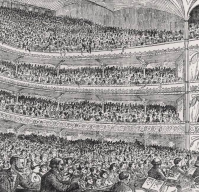 New in the publications part of this site is a paper I’ve been involved with writing, with Dr Joshua Edelman and Royal Central School of Speech and Drama, University of London and Dr Maja Sorli, and with the collaboration of Natalie Querol at The Empty Space. The Value of theatre and dance for Tyneside’s audiences is based on a 6 month research project which looked at what around 1800 people thought, felt and experienced at some theatre and dance performances at various Tyneside venues in 2014. It was one of a number of projects supported by the Arts & Humanities Research Council as part of its Cultural Value Project.

We were especially interested in whether there were differences in what people felt they experienced in subsidized, commercial and amateur performances, and to what extent some of the truisms of the ‘arts sector’ held water when viewed through audience experiences. (Such as the notion that the commercial sector feeds in innovation and excellence, or that audiences need to be ‘developed’ to move between sub-sectors.)

The paper – the first of a number, and based on first research into the data - has 6 main initial findings, although the extended discussion of the data is also interesting and hopefully useful. These are, in summary:
• Most theatregoers get roughly the same kinds of things from their experiences, be it in the subsidized, commercial or amateur sector
• Subject matter is key in attracting audience members, alongside perceptions of quality
• There are, however, differences between ‘comforting’ performances and ‘challenging’ ones, which relate to differences between commercial and subsidized sectors, but not simplistically so
• Audiences generally attend in pairs – although amateur theatre attracts larger groups. People go on their own to subsidized theatre more often than other types.
• Value matters more than price. (One truism supported, then.)
• Audiences are open-minded and loyalty to some venues seems to translate into frequent attendance elsewhere too. (One truism challenged, and one in the eye for Bourdieu perhaps.)

Josj, Maja and I spoke about the first findings at an Open Space event led by Natalie at Dance City last month, which then fed into the draft of this paper. The most striking thing about this event for me was the rare and energizing effect of having people active, experienced and skilled in amateur, commercial and subsidized theatre sectors together. (Acknowledging the artificiality of that construct, of course, especially as some venues, arts centres particularly, are working across or with all three. As ‘business models’ hybridize this is likely to be increasingly the case.) To add to that, we also had some of the audience members who had been part of the research there. That seemed like a really healthy thing, something I’d like to be part of more.

The voice of the audience is heard very directly in one email we were all very fond of, from someone who had taken their husband to see Matthew Bourne’s Swan Lake, and then, a few days later, gone of one of last season’s more unfortunate Newcastle United games. She concludes:

‘At the end Andrew turned to me and said how for a similar amount of money we had watched a whole company of such talented dancers, as well as the inspiring visual scenery, yet that day we had watched such overpaid footballers putting in a lack of effort. He questioned why we rarely go to the theatre, yet unthinkingly go to the football every other week. Straight from the match he marched me down to the theatre to buy more tickets. We ended up joining as friends of the theatre and bought a fortunes worth of tickets for throughout the year, starting with Pygmalion the following week.’

And with that I wish you an interesting read and a Happy New Football Season.
ahrc audiences cultural policy cultural value research theatre tyneside