Make Your Own Damn Art World 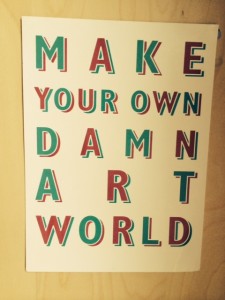 In my days at the Arts Council I would occasionally find myself in front of a conference room full of skeptical faces not so silently communicating an articulate WTF to the priorities I was passionately setting out. One such event has stuck in my head as somehow emblematic and I’ve been reminded of it in the last week.

The exact date eludes me, 2009 I suspect from evidence I’ll mention later. I was talking about the need to extend the reach of arts audiences beyond the better educated, higher earning people who are statistically more likely to attend or take part in the arts. I don’t recall using the word, but underlying the need to change this, for me, was inequality and its damaging effects, something which has got much worse in the years since then.

For me the problem with the low levels of participation in the North East – in the arts as defined by funders it must be noted – was not one of simply efficacy. Few people were suffering from tiny audiences, although some could see future demographic challenges. Nor was it to do with the argument that public involvement leads to support for public funding of the arts, although that was important, and backed up by ACE’s public value enquiry. Primarily it was a cultural one: the narrower the audience, the narrower the people involved in making culture, the smaller the scope, imagination, range and value of that culture.

Much of the reaction was predictable and understandable even, from a certain perspective. Did ACE want organisations with concert halls full of ticket-buyers to turn people away because they drove cars that were too nice and replace them with paid-for poor people? Wasn’t the art more important than ticking audience development boxes about ethnicity or disability? Doesn’t it all come back to quality? Why were we never satisfied? (I may have imagined that last one.)

The moment I often think back to, and can never remember quite what I said, is when an experienced local authority officer said, exasperated. ‘Well, if there is a change of government soon at least we’ll be able to stop doing social work and get on with just doing art.’ I often wonder what he thinks of what he carelessly wished for. I've not got any less opposed to the underlying attitude.

I was reminded of this because the debate about cultural access seems to have been revived by speeches from both Tory and Labour culture leads. Sajid Javid’s rather impressive speech should make some of the sneering at his appointment clear for what it was: an insular reaction to an outsider. I like that he is clear about what he thinks isn’t acceptable, be it the ethnic balance of funding or the regional spread. I was less keen when he felt obliged to stick up for his team mate Mr Gove, even though the kneejerkery Goves inspires is almost enough to make me want to stick up for him, but his main points were both human and real. I'll even forgive the Thatcher portrait material as I embrace diversity in all its forms.

Similarly Harriet Harman’s speech is clear and its substance to be welcomed, I think. It’s a bit of a shame she strays into ad hominem attacks (or ad colosseum, if that weren't the wrong opera company) and doesn’t talk enough about the work many organisations are doing to change the culture of the arts.

What struck me, particularly about Javid’s speech, was that he was grappling with nettles arts leaders need to be more vocal about. The sector’s response to Rebalancing Our Cultural Capital has, on the whole been rather timid, for instance, as were some responses to the Select Committee. I don’t mean I would have liked more aggression towards government or ACE. I mean I would have liked a braver set of responses than I’ve seen, a greater willingness to move beyond acknowledging the difficulties and emphasing quality, a greater volunteering to work through, together, what needs to be changed and redistributed. A greater reconciliation to and then creative working with the awkward facts of the maths and the public.

This feeling has been confirmed by some of the reaction to Harman’s speech. Of course it’s true that lots of people are doing great inclusive work, working hard to open doors and keep them open. And that you can’t force people to come to an arts event, or work in the arts, if they don’t want to. And that football season tickets are expensive. And that your dad’s a binman but you still go to the opera.

But one paradigm I particularly dislike is summarised in one response I saw on twitter: ‘Something is wrong with the public's cultural perception, not the arts orgs.’ This attitude always reminds me of Brecht’s poem ‘The Solution’. This public isn’t good enough, get me another…

I have a fundamentally different take, as I hope has been clear here. Now the politicians have had a go, I’d like to hear more people debating these issues, from the same unequivocal starting point: the status quo is not good enough.

The image above is a postcard by Bob & Roberta Smith I have on the side of a bookcase in my office.)
#artsfunding DCMS Sajid Javid