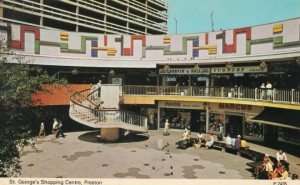 Last week I was part of a panel at the Discovery Museum in Newcastle taking on the (for me anyway) rather uncomfortable topic of Englishness, and specifically ‘Who are the English?’ This was part of IPPR and British Future’s ‘Festival of Englishness’, a series of similar discussions, and is almost certainly, probably definitely, the only time you’ll see me on a platform festooned with St George’s flags.

I had been asked to talk as a writer interested in regional identity, but with my ACE experience giving a perspective on ‘England’. I agreed because the ‘festival’ seemed to be coming from a progressive place of questioning, rather than a narrow nationalism, and precisely because I was uncomfortable with the topic and wasn’t sure what I thought. Head towards discomfort and uncertainty, I thought, that’s where things get most interesting… Then I got nervous but carried on regardless.

After much pondering, I focused my comments around three key thoughts:
• I am more likely to identify as Northern English or European than simply ‘English’. (I rarely go for `British’ either. It reminds me I’m a subject.)
• That’s because I am not comfortable with the dominant ideas of Englishness, though I am very attached to many places, people and heritages in England. But the dominant culture – of Oxbridge and London – doesn’t, really, value my England as I do. And the England of the right certainly doesn’t.
• Englishness may be better considered as something you do rather than something you are by virtue of place of birth or current address, and has certainly been invigorated by the many inputs to that activity. (Something demonstrated really well in the Discovery Museum’s new display on migration, by the way. I made reference to blow-ins from the ‘Romans’ on Hadrian’s Wall, actually from 23 countries, to people settling here now, and their role in the co-creation of Englishness.)

Stopping off in a few of my poems by way of illustration, including the whole of the one below, I concluded with this:

‘The English are the people working on Englishness at any given moment. We can choose it, co-create it, rather than simply accept it as a heritage. As Zadie Smith said ‘To live variously cannot simply be a gift, endowed by accident of birth; it has to be a continual effort, continually renewed. [...] Flexibility is a choice, always open to all of us.’

Other speakers provided interesting perspectives. Sharaz Haq talked about Tina Gharavai’s film I am Nasrine. (Tina is a Newcastle and Paris-based Iranian-American-Geordie filmmaker, though I’ve never asked her how English she feels.) Matthew Rhodes of British Future, was most in favour of reclaiming the flag from the likes of the EDL, and for celebrating English history via St George’s Day more. Baroness Joyce Quin, former Gateshead MP said she was proud to be Geordie and British but was, as I am, wary of giving the Little Englanders comfort in any discussion prompted by the national debate in Scotland.

The discussion, chaired by Anna Turley of IPPR North, was a good one, although no one from the panel or the 100 plus people there ever really threatened to actually define Englishness. Someone I think used the word ‘tolerance’: it certainly wasn’t me as I can’t be doing with that word. If anything, the audience could have put the panel on the spot more: I’d have asked which of us would fly the flag on St George’s Day. (I wouldn’t. I think that’s a very English attitude, actually.)

Questions that stuck with me included:

• Do we all get to choose our identities, or just certain privileged groups of people? Which identities are imposed upon which people?
• What are the differences between geographical, political, civic and cultural focusing on national identity, and the differences in effect?
• What is going to happen in the North East if Scotland votes for independence? There seemed a very ambivalent feeling in the room – a kind of jealousy almost, but also a kind of fear. What can we learn from the Scottish debate?
• How do we move beyond wrestling with only nice liberal ‘welcoming’ definitions of Englishness such as I might give, and grapple with the more resentful lines some would draw? • How much of Englishness is a kind of nostalgia, albeit for something some have never experienced?

Here’s the poem I read at the beginning, because of its title. (And to insert a different type of language into the debate. I think it may have puzzled some, but so it goes.) I wrote it imagining a parallel universe where the peasant breads of England would be embraced by the foody middle classes. In its way, it partly describes a desire to stop apologizing for being stereotypically English in certain ways – what I’ve referred to before as the bitten bottom lip, rather than the stiff upper lip – and the experience of living as if in some kind of cultural border land. It’s also about cooking, obviously.

On Realising I am English

‘The important thing is to adapt your dish of spaghetti to circumstances and your state of mind.’ Guiseppe Marotta

In the parallel universe where wizened Corsicans
rave over suet dumplings and rapturously murmur
improvised sonnets in praise of stotty,
barm cake, bloomer, cob, scone (to rhyme with gone)

no one would criticise me for never mentioning
the real grievance at the heart of this poem.
I’d be lauded for the tightness of my lip,
for the way you feel my teeth grit and grind,

for how I shrug off questions with a joke
about the endless spouting of emotion
I waded through to get here.

I think this as the glaze of a first pressing
spreads its lucent green over the frying pan,
ready to spit at the very suggestion of an onion.
IPPR poetry politics