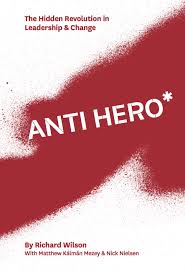 It might be stretching it to say that the recent attention given to leadership changes at the National Theatre had quite the same fervour as, say, that regarding Alex Ferguson being replaced by David Moyes at Manchester United. But it did suggest the cult of the cultural leader is alive and kicking.

Richard Wilson, with Matthew Kálmán Mezey and Nick Nielsen, has written a very stimulating paper, ‘Anti-Hero’ as part of his Clore Social Leadership Fellowship, outlining what his subtitle suggests is a ‘Hidden Revolution in Leadership & Change’. This is being carried out by what he calls ‘Anti-heroes’, people who have moved through the ‘Heroic’ style of leadership which dominates many institutions and organisations - characterised by Wilson as including over-confidence in the rightness of one’s opinions, inflexiblity in approach, a lack of empathy and refusing uncertainty - in favour of ‘empathy, humility, self-awareness, flexibility and, finally, an ability to acknowledge uncertainty’.

Anti-Heroic leaders tends to welcome and genuinely engage with feedback and challenge, no matter how challenging to themelves or their views, making themselves vulnerable (see my recent blog on that subject here) by examining themselves and their own ways of thinking. They can build empathetic relationships with diverse people, without having to accept others’ frameworks or impose their own.

They embrace uncertainty and complexity – indeed, their downside can be slower decision-making and over-complicated communication, such is their keenness to embrace complexity rather than over-simplify. (Which, as Wilson points out, is one reason we still need more-old-fashioned types of heroes too, as well as some of the quality of ‘heroic leadership’. No one really wants to be rescued by a fire fighter who starts by asking you to redefine fire and its value, do they?)

As well as exploring interestingly what an Anti-heroic leader might look like, and how they might have got that way, drawing on research such as Rooke and Torbert’s important ‘Seven Transformations of Leadership’, Wilson also argues for investment in transformational leadership training rather than informational training.  One of his key arguments is that developing leaders fit to wrestle with the ‘wicked issues’ we now face requires a different, more person-centred approach, alongside organisations and a broader culture that are more comfortable with, for instance, changes of mind.

Wilson is at pains to point out he is not saying a number of things those who yearn for firm leadership might associate with the idea of the ‘anti-hero’ leader. He doesn’t, for instance, blame the 95% of leader he suspects are not yet ‘anti-heroic’, acknowledging that ‘most of our leaders are the victims of outdated systems of leadership that were built for simpler times. Indeed, our leaders are very often doing their best in very difficult circumstances.’

He also points out that this more developed leadership style does not mean ‘being nice’ or ‘wanting to people to like you’ – empathetic does not equal sentimental. Indeed, it can be quite the opposite. (There is, I might say, a sentimentality to the idea one can ‘win’ certain arguments, or that the  silver bullet ‘right answer’ is out there.) Complexity and the need to be adaptive don’t mean you shouldn’t ‘grasp nettles’ or ‘grip tasks’ – they mean it’s even more vital for you to do that, but in a particular way, reflecting Wilson’s conclusion:

‘To be anti-heroic you necessarily need to see the world in shades of grey rather than black and white. There is no fixed ideology; there is, instead, self-doubt. Life tends to be fluid and flexible and inherently less certain than the classical heroic path. It’s easier with the certainties and focus of the heroes’ path. The problem is that it’s less useful.’

This paper is not about the arts and culture, but has much resonance and relevance for a sector that is as prey to a desire for Heroic Leaders as any other. Organisations’ stock rises or falls subject to views of their leadership, in many ways rightly, in others mistakenly. (Readings of ‘governance strength’ for instance, often struggle to go beyond the team-sheet to the actual ways of working and thinking.) We can slip into a tendency to look for simplistic solutions in CEOs and Chairs, rather than the systems they work in, and to attribute leadership effectiveness to, say, the public speaking charisma of the CEO, rather than organisational culture.

The rise of ‘leadership teams’ to head up organisations – usually duos, but sometimes management teams – would form part of the rise of the Anti-Hero described here, bringing in a natural diversity of perspectives, as well as what you might call a conscious one. (I’m not going to name any such teams, but all the ones I’m thinking of are either all or partly female, which is one reason I’m rather sorry a less ‘gendered’ term than Hero couldn’t have been found.)

One of Wilson’s key recommendations is investment in transformational leadership training, and this is a useful reminder to all parts of the arts and culture sector, from boards looking at meagre training budgets, to funders ‘commissioning’ leadership development. How are we helping create a genuine diversity of potential leaders who can transform themselves, and thus lead our organisations through whatever comes? Are we going beyond the basics, to train people to challenge the broader system, ourselves included, to adapt?

If we don’t keep doing this, despite the difficulties, we may come to regret it: as Wilson quotes Harvard Professor Ron Heifetz, “the most common leadership failure stems from attempting to apply technical solutions to adaptive challenges.’ And you don’t need a hero or an anti-hero to know our challenges as a sector are not merely technical, but adaptive…

(Forgive me the title of this blog, I was tired and would like to write for a tabloid.)
coaching cultural leadership leadership poll training