The creative space of risk and vulnerability 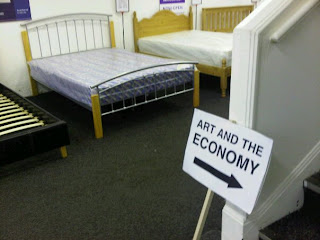 I've had some interesting responses to my blog about vulnerability and Brené Brown, and then saw this interesting article by Ivan Wadeson of the Audience Agency, which gives some clear examples of how risk can be embraced to good effect. I thought it was worth sharing as a kind of addendum to my previous post. (I'm docking whoever wrote the sub-headline a point for 'difficult economic times', though.*)

The relationship between stability - of leadership and vision particularly, but also some funding - and change - in programme terms as well as in the funding/economic context - is really interesting. It's both a practical challenge and a leadership dilemma, hence, perhaps, the two-speed approach Ivan describes. The key point, however, being that putting yourself in what David Jubb calls the 'more creative space' of risk, or vulnerability is both brave and encourages others to be bold.

* Why do I do this? Well, certainly not to deny the reality of the economy for many. But, very briefly, because whilst obviously post-2008 has been very different than the years immediately before it, to implicitly suggest the economy was working for everyone in the UK is misleading, if not a lie coming from some people. In my lifetime at least, it has always been 'difficult economic times' for many people in many places and the 'difficult economic times' rhetoric ignores the political choices currently being made. After all, is it not also 'fantastic economic times' right now for some people?