I like arbitrary limits on writing, so have decided to wrap up 2012’s blogging ventures in the same format, roughly, as I used last year. I am very ‘Green’ like that. 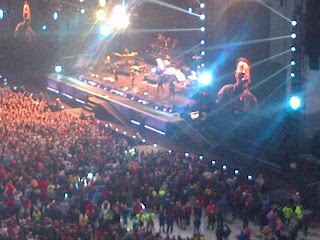 Here’s a bad photo of the cultural event that moved me most this year.

1. Some awards...
Award for Heartbreaking Daftness: The Government, for so many reasons. Runners up: a ties between Newcastle City Council and Preston City Council for providing my cultural low lights with proposals for 100% cuts and 100% demolition to iconic and City-defining work. Labour Councils caught, like Elvis, in a trap.
Clive Dunn Memorial 'They Don't Like It Up 'Em' Award: Jeremy Hunt for sacking Dame Liz Forgan.

3. Most visited blog posts in 2012: Cuts and Choices, …and always wear the happy face,  What does resilience mean anyway?, Chairs Missing, 12 for 12. (I should probably return to that last one and see how accurate my predictions were.)

4. Nice Work If You Can Get It column ticked big style this year, by everything of course, including some fascinating time thinking about artists and value for Exchange/MMM, getting the chance to mess about with poems, numbers and analysis for Sponsors Club, working with some great people kicking off a re.volution, but also by talking about adaptive resilience to a lunch of senior folk from South African arts institutions (the kind, to be frank, I rarely get to talk to here…) in Grahamstown during the National Arts Festival, and by my speaking tour of Australia, courtesy of Country Arts SA, Kumuwuki, Positive Solutions/Board Connect and others. I won’t kid you: although it was Hard Work, it was unarguably Very Jammy Indeed. Which is how I feel most of the time actually. It’s been a hard year in many ways - I lost a couple of grandparents, amongst other things – but getting to work with creative people on making sure the negatives in our culture don’t win feels like something worth doing.

5. Cultural highlights: my mind goes blank… Too many. Nothing moved me or made me feel the power of music to really mean something to people as much as moments in the Springsteen gig at the Sunderland of Light. My albums of the year both came out on the same day, weirdly enough: Field Music’s Plumb, and Punch Brothers’s Who’s Feeling Young Now? I loved Graeae/La Fura del Baus’s Prometheus at SIRF. John Tranter’s Urban Myths. Preston Guild. If there was a colour darker than black... at Kumuwuki. The Futureheads starting their gig at the Georgian in Stockton with the hardest acapella version of Richard Thompson's 'Beeswing'. Lots of things in AV 12, including my SloWalk. Elizabeth Price at BALTIC. The chimneys and NHS bits of the Sports Day Opening Ceremony – and lots of the sport too. And your thing, that was great too, obviously.

2013 is going to have some extreme weather conditions I suspect. One thing which will brighten it up for me is Smokestack Books publishing How I Learned To Sing, my ‘New & Selected Poems’. I’m most excited about publishing the new things after a long, long gap, but typing up the ‘surviving’ poems from my old books – having nowhere to put my floppy discs, oo-er Matron – was kind of revealing too. Available for readings, performances, weddings and civil ceremonies from August 2013.