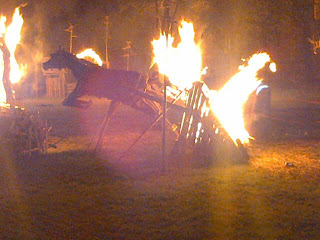 More than 20 years ago I wrote a poem called 'The Horse Burning Park', about a heritage attraction dedicated to the ancient industry and craft of burning horses. It was the title poem of my first collection, published in 1994, and felt a bit of a 'breakthrough' for me as a writer. I was especially proud when the great poet Gordon Wardman sometimes included it in his own readings in the early 90s. Googling it will give you some links to 2nd hand copies of the book, at least one of which has the dispiriting description 'appears unread'. The bulk of remaining (remaindered) copies live in my office.
More encouragingly, I also came across a blog by Peter Knagg which concludes  'Joseph Roth and Geoff Hattersley say more to me about existentialism than Camus and Wittgenstein, Geoff, who comes like a view from the Barnsley factory floor… but his voice isn’t heard enough and not enough people read Simon Armitage and what about, The Horse Burning Park by Mark Robinson?' (Forgive the trumpet blowing, please, finding something like that so long after the book came out feels like getting a reply to a message in a bottle. He's right about Geoff Hattersley too, by the way.)
Last weekend was Stockton International Riverside Festival and Stockton Weekender round here. The most memorable event of some great street arts, with the possible exception of Prometheus by Greaea/La Fura del Baus which was a real highlight of the festival, was the burning of the Gignantikow Labyrinth - built over several days by local community participants, used as a site for theatre and music, and then ceremonially burnt in front of thousands.
It provided me with the image above of The Horse Burning Park made as real as I'd want it. Give it time and art will bring you everything, whether you want it or not.
my shallowness poetry