Movingpictures 25: Hello to you out there in normal land...


To round off this Olympic month, I thought I would share Ian Dury's original of Spasticus Autisticus, after a version was included in last night's Paralympics Opening Ceremony. But then I found something more interesting instead...

Above is Ian Dury talking about the song, after it couldn't get played on the radio, back in 1981. Don't forget, kids, this is someone who had just had a massive Number 1 (when Number 1s were Numbers 1s!), so not quite the outsider he might seem now. It makes me think of a number of 'transitions', not all good:

You can't ignore, however, the great ironies of, for instance, Cameron being interviewed before the ceremony, let alone Atos sponsoring the games, given the clear, focused and energetic attack on disabled people being carried out by this government. Or indeed that nagging thought someone put in my head about 'inspiration porn', or the question why disabled people need their own, separate, games rather than competing at the same time as others? (I imagine there are very practical reasons, and not just for Oscar Pistorious, and maybe 2 halves is better than a month of Olymics There are arguably even cultural cases to be made by some disabled and deaf people, but it's still a question that makes me pause.)

Anyway, those are questions for other times perhaps, after we've enjoyed the sport. Big congratulations to graeae's Jenny Sealey and Bradley Hemmings for a really powerful opening ceremony - I certainly cannot remember anything of such power and visibility for disabled artists.  Well not since graeae's Prometheus in Stockton actually, but that wasn't broadcast globally. Here's a photo I took of it though: 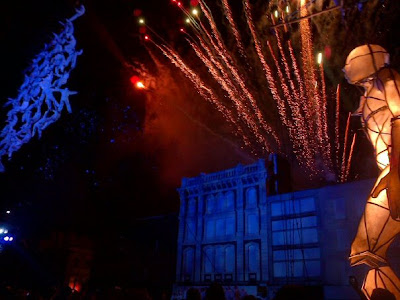 The issues of access that remain can only be assisted by this profile. He said optimistically... having recently been sorely disappointed to find a major national arts event - on the topic of people working together even - being held in a venue that was not accessible to wheelchair users, due to its age and nature. So, many of the performers so brilliantly showcased last night would have been outside in an adjacent space, at best, if they'd wanted to join in - surely not an image we can sustain. The understandable defence given was 'this is the venue we have, we wish it were different'.  Wishing it were different no longer seems quite enough. Time for a bit of 'I'm Spasticus' perhaps?
#artsfunding creative case disablity paralympics