Back from South Africa, thinking about 'this little country' 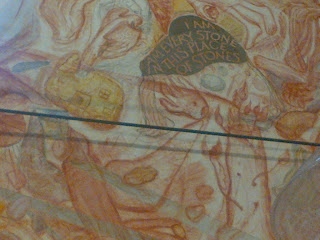 Detail from mural by Peggy Delport at District 6 Museum

My regular reader will have noticed I've been quiet. For the last two weeks I've been in South Africa, visiting the Eastern Cape for meetings with partners in the Swallows Partnership - I chair the Swallows Foundation UK - visiting the National Arts Festival in Grahamstown, and much else, from talking about adaptive resilience with a group brought together by Monica Newton, new CEO of the National Arts Council of South Africa, grappling with sustaining a sector in harsh times and with many 'wicked problems', to performing at Harry Owen's Redditts Poetry at the Festival alongside rappers and old ladies, via climbing Table Mountain and seeing baby elephants. (All work and no play, you know...)


In Port Elizabeth, it was great to see the public art trail at the Donkin Reserve finished, and to talk to the architects behind it about how it had been hugely inspired and informed by the work of Commissions North in North East England. It was also a pleasure to meet up with a group of cultural leaders and artists who had been visiting South Africa and having what is known to the Swallows as the Peter Stark Bus Experience which gives a fantastic, dazzling and at times overwhelming and confounding induction into a great country. We believe international connection such as this almost decade-long partnership, is most powerful with a proper induction, especially given our histories and imbalances, rather than on a hit visit and run basis.


And of course any proper induction to a place involves feeling disorientated and overwhelmed at some point, which is what most people feel on their first visit. I was glad to see it was no different for this group than it had been for me when seeing, for instance, how the museum, gallery and library at Red Location rub directly up against the township at New Brighton. South Africa is a hugely exciting place, but it's not a place I find 'easy', which is exactly why I like it. Most of the folk I've met are also very welcoming to artists, generous and challenging people, and for all the difficulties it is still an optimistic country.


(Side point: I often think, though, that many people could get as invigoratingly disorientating an experience going off their beaten tracks closer to home - whether that's into prison, into a betting shop, a different pub or a community centre, a tennis club or a university. Maybe we need to be promoting into-nation-al arts work as well as international? This is a relation of my argument that 'trainee' cultural leaders should be sent to Barrow or Middlesbrough not to National institutions.)


I had intended to return to the blog with either something about Bruce Springsteen at the Stadium of Light, or additionality in funding, as those have been much on my mind. I was prompted to knock off this warm up, believe it or not, by a rather moving last paragraph in a recent blog by Matthew Taylor of the RSA, which crystallised some post-trip thoughts about the UK for me. I shall just quote that by way of urging you to read his blog - and to help me with his question.


'Sometimes as I travel round in this little country I feel this: it’s all here, the edginess, the beauty, the urban melting pot, the unchanging landscape, the family trees, the new settlers, the unceasing ambition, the sigh of contentment – a million different lives in a thousand different communities. And despite the economic crisis and the biting austerity the question is simply; why can’t we make more of it, for all of us,  for this, our one and only  life.'