The Art of Exit (not about Jeremy Hunt) 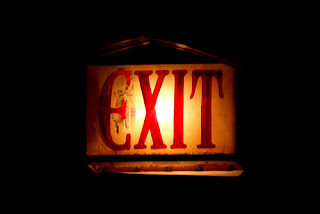 One of the most common and often most difficult discussions in any planning process is the one that comes after the fun, creative prioritising of the possibilities and exiting new programmes - 'what are we going to stop doing?' This is especially tricky if it means closing down programmes or even venues, or stopping funding things. People are attached, sometimes beyond reason, to certain things, even when the bigger picture suggests a need to move on. The need for change that involves what some call 'creative destruction' is implicit in the thinking around resilience - in my own work, but also arguments by others, including Diane Ragsdale recently. (I'm not keen on the term myself, too negative even in its oxymoronic catchiness.)


NESTA have just published 'The Art of Exit' by Laura Bunt and Charles Leadbetter, a report 'in search of creative decommissioning'. the looks at how combining innovation and decommissioning can be used to improve public services - or at least to find better solutions to problems which have traditionally been addressed through public services. (I suspect something of a privatisation agenda behind some of the examples.) They put this in the context of reduction in public spending, although very acceptingly it seems to me. (If I knew more precisely what neo-liberal meant I might use it here.) That said, there are some useful studies in the report, and a potentially useful set of steps identified.


These are not put forward as a blueprint, or sequential, but include two strands 'innovation' and 'decommission'. The six actions are:


One can see fairly clumsy attempts to do this being made in the arts - eg with Darlington council and the arts centre, or at a national level with audience development, or arguably around philanthropy. This difficulty is when these are changes are driven by fund-holders, rather than the collective, and when - as Bunt and Leadbetter discuss - politics and formal accountability processes hamper that switch to new ways of working. These get in the way of what I would suggest is a key element of successful creative decommissioning: collective co-design, involving 'providers', 'users' and 'funders' on an equal basis. if you're grappling with how to move from a situation which is simply not delivering what it could, or not sustainable, it may be a useful read.
(Actually, although my title says this is not about Jeremy Hunt, the first and last of the bullet points above do seem applicable...)
Photo by Sharat Ganapati under Creative Commons licence
change Making Adaptive Resilience Real; arts policy NESTA politics