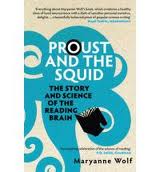 Sometimes, if I'm feeling confident, I describe myself as a writer - lots of what I do under the Thinking Practice banner involves writing at some stage, as well as my creative writing, and it's just a more pleasing word than consultant. But actually, I'm more fundamentally a reader.
One of the books I've been recommending to people recently is Proust and the Squid by Maryanne Wolf, so I thought I'd do likewise here. It's an exploration of 'the story and science of the reading brain', and although it got a little stretching for my non-scientist brain at times, it's a fascinating setting out of the miracle that is reading, how it developed, and the difficulties some brains have with it - and the benefits of how they compensate.
Reading is a wonder because it is not genetic, unlike, say vision and speech. It's a complex process that literally changed - and changes - the brain, creating new pathways between the visual and pattern recognising bits of the brain, and the 'executive' bits that make sense of and apply all that. The quicker we can scan the visuals and decode into words, the more time the brain has for thinking about what it's reading, and the various layers of meaning therein. The more you hone the skills of reading, the more the brain learns to work in that way all the time - literally creating the pathways and connections. (Apologies to any cognitive scientists reading for any science-mangling in the last few sentences.)
There are lots of ideas in the book, which has elements of a cultural history of reading but is mainly to do with how the brain is brought into play with the various elements of reading. (There's not actually lots about Proust and his take on reading, which I found slightly disappointing, although I know for some people a little Proust can go a long way.) One of the most powerful strands of thought though is how important learning to read is in helping a person understand the world, and not simly at a practical level - and how for people who find that difficult (Wolf's specialism is the study of dyslexia), the brain compensates by becoming stronger in the right, more creative, hemisphere rather than the left, which is more involved in processing. (Something perhaps obvious to the high proportion of visual artists with dyslexia.)
It struck me though that Wolf is describing reading as perhaps the basic cultural skill. As she says with regard to 'word poverty': 'It is not simply a matter of the number of words unheard and unlearned. When words are not heard, concepts are not learned. When syntactic forms are never encountered, there is less knowledge about the relationships of events in a story. When story forms are never known, there is less ability to infer and to predict. When cultural traditions and the feelings of others are never experienced, there is less understanding of what other people feel.'
Which feels like a very sound argument for reading as cultural education, and for culture more generally: understanding what others feel, the ability to infer and to predict, to see relationships and grapple with concepts. This is what cultural education, starting for many with reading, can do. I've only had chance to read Darren Henley's review of Cultural Education in England once, quickly, so won't comment on it fully now. It seems a mix of welcome support for the role of cultural education, some obvious worthwhile ideas such as better working across government departments, an outbreak of new initiativitis including some reinventions and some slightly daft ideas - Downing Street Medals? Yet another go at a Culture Week? - with little mention of money and plenty of wiggle room for the masters of the actual curriculum.

I found the emphasis on 'knowledge' too redolent of Michael Gove's rhetoric for comfort, especially in the light of a largely unspoken but nonetheless very noticeable downplaying of the creativity agenda. This is about an education in culture as much as if not more than it is about education for culture. The question, then, is always whose culture and what can you then do with your knowledge, understanding and skills?
Of course, my suspicious brain may got carried away and read too much between the lines. Anyway, it's an important document, right, wrong or a mixture. Some immediate responses include those from Arts Council England, the Prince's Foundation for Children and the Arts, BFI, and the Government itself.
arts policy cultural policy DCMS politics; education reading writing