Bottles to the party? 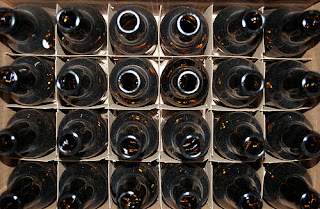 Photo from Flickr under Creative Commons, by ilovebutter
a-n have just published a very interesting report by Dany Louise called ‘A fair share’ which looks at the funding going direct to individual (visual) artists. It’s a thorough and interesting piece of work which compares the situation in the various parts of the UK, application and success rates and other factors. I don’t really have time to do it justice, but wanted to bring it to your attention if you’ve not seen it yet. Dany’s Louise’s conclusion is that ‘shockingly few individual artists apply for funding in their own right, and even fewer are successful. What this means is that there is little direct funding being given to artists to pursue and develop their own projects, under their own control - under 20% of available funding for the visual arts in England, 14% for Northern Ireland and around 18% for Scotland and Wales in 2009-2010.’
One thing I do find problematic is the notion of ‘fair shares’ for different art forms or artists working in different artforms. Is there a ‘natural’ proportion we should refer to, and if so based on what? Size of audiences - and do you get more or less if your potential audience is bigger? Numbers of ‘professional’ artists? Cost of production in your artform? How big the market failure is in your artform? All might produce different results for any single artform.
The key point though, which I agree with strongly, is that applying for and controlling your own funds can be hugely empowering for individual artists. In ‘adaptive resilience’ terms, it gives and artists ‘assets’ to use. My sense is that in England the application process as a whole has become less supportive of individual artists over the years since Grants for the arts was first introduced nearly a decade ago, when it was a fairly seismic shift in some regions where individual artists had had less support. When it began significant emphasis was placed on supporting artists to have their own big ideas – or to ‘bring their own bottles to the party’ as one of the main architects of Grants for the arts Andrew Dixon used to say. (And indeed still says in this very interesting Variant interview.) Certainly in the North East we funded some brave and bold individual applications, in all artforms.
This did, however, become increasingly difficult as each revision of the scheme introduced new layers of absolute consistency and greater need to create what you might call 'project-shaped projects' rather than, say, artistic investigations. One which sometimes made me scratch my head – from my seat around decision-making tables but not having to assess applications – was the increased requirement to ‘evidence demand’. Whilst not unreasonable in some circumstances, this is harder for individual artists to do – and less appropriate to many, especially when applying to support new work. It makes it harder to back the talent. Hopefully the new focus on talent development will provide some corrective to this tendency.
arts policy funding lottery funding visual arts