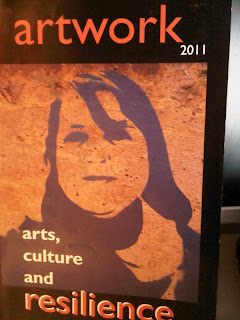 I recently agreed that Community Arts Network South Australia could use an extract from Making Adaptive Resilience Real in their journal artwork. Nice to be published in Adelaide I thought, and then thought little more. Imagine my surprise and nervousness, then, when they kindly sent me some hard copies and I found the whole edition was not just themed around resilience, but was mainly made up of responses to my paper. My reaction was fairly typical: part of me was flattered and grateful for the attention, part of me was fearful I’d get taken to pieces and have my inadequacies mocked.  (What’s that, dear reader? Not typical? Just me? Oh.)


This edition of artwork is partly to mark the 30th birthday of CAN SA, because as editor Lisa Philip-Harbutt says 'to make it to 30 you have to be adaptive and resilient.' It includes essays which respond directly to Making Adaptive Resilience Real, others which take a storytelling approach to the idea of resilience, listening to community arts practitioners.

The most thought-provoking – for me anyway - challenges to my paper came in the papers by Jo Caust and Ianto Ware, relate to issues of values and power, and whether resilience is essentially a conservative or passive notion. Jo Caust suggests a greater emphasis than I intended on cutting 'dross' (not my word) and rightly points out a lack of reference to the power dynamics within choices, and the role of education and class in that. To a degree, that's fair comment. It would have taken a different paper to also investigate the power dynamics within choices. I don't accept that individual decisions are made by government appointees, in the interests of government - at least that’s not been my experience in this country. That the issue of values and power dynamics within ecological resilience bears more investigation and greater emphasis I do accept.

Bourdieu and Raymond Williams are cited as missing from my analysis. Reflecting on this, I feel I understand Williams from the inside out, as it were, with all the contradictions that come from ‘acquiring Culture’ as an almost stereotypical grammar school boy in a cheap blazer and living in one of the untutored provinces. I have been patronized and not taken as seriously as I thought was deserved, at times, and I’ve done the same to myself. I’ve felt out of place. I’ve also felt distanced from parts of my roots, comfortable as I am with them so much of the time. I’ve also felt ever so slightly exotic and special at times, as well as – most often, I should say - valued approximately correctly for what I am or was doing and well-supported. I’ve seen this happen to others as well, individuals and organisations and ideas. However, unlike, say Tony Harrison in his classic School of Eloquence, I’ve decided not to feel either guilty about it or burdened by it. I take responsibility for my own contradictions. (I wrote that down almost exactly as I realized I thought it. It sounds a bit grand now it’s in black and white, but it is also feels true, so it can stay. So it goes.)

I was certainly more interested in Making Adaptive Resilience Real to set out the adaptive cycle and characteristics organisations could build upon than exploring these issues of value and class, important as they are. I am pleased to see from the other essays that it has been useful. Nick Hughes from Restless dance describes using the 8 characteristics to look at his company, and ends by saying it’s a ‘valuable resource’. I was pleased at that, of course, but more so at why: ‘one of the best aspects of the theory is that it changes the language and the mindset used to examine a performing arts company. It encourages you to see it as a moving and interacting entity; as an organism rather than a plan or a picture.’

Taking responsibility for one's own resilience does not mean simply accepting either status quo or whatever change is thrown at you, or not protesting at, say, cuts or damaging shifts of direction. In general I take many of those problematics as read, I guess, perhaps too much so. There may be a trace of North England Stoicism in my resilience thinking, though I’d deny I have a Stiff Upper Lip. (That’s for posher people, I’m more the Bitten Bottom Lip classes.) The emphasis on maintaining core purpose and identity is the heart of my take on adaptive resilience, and allows for not ‘simply accepting change’. It is, if anything, about gathering together the power that you do have, and using it for your own purposes – as unions, protest movements and communities under fire have traditionally done, and this is very much about values and power dynamics. I have said before here that I think one aspect I underplayed in the paper was the impact organisations can have on their environment, the creative change they can bring, and I think this links to that.

The intention is for the issue to be made available on-line in due course, and I’ll share the link when available. (Edit: the publication can now be found here.)