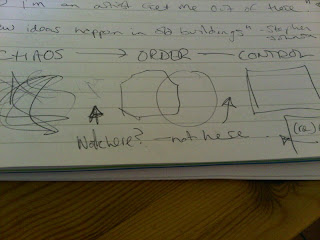 Yesterday I gave myself a treat of a day and went to TEDxYork, organised by Marcus Romer and Pilot Theatre. This was a very different kind of day to the Stronger Together event last week, although there were some people in common, and it was similarly well-delivered. (Can I suggest there's a sideline for theatre people in running/designing conferences, they seem to handle the 'theatrics' of them better than conference organisers.) It was a kind of festival of storytelling and idea sharing and listening, with short bouts of discussion that looked, to the old-fashioned eye, like lunch and coffee breaks. The main sessions didn't even have questions - you just moved on to the next bright person. Some of the talks were better than others, but only a couple didn't give me at least one thing to think about or write down.


There were lots of I-Pads out. It was that kind of a crowd. Here's a few of the things I wrote down in my high tech Pukka Pad.

There was of course, much more, but they could each become a blog in their own right.
The day was themed around inserting the A of Arts in the STEM subjects of Science, Technology, Engineering and Mathematics to make a new STEAM age. A number of speaker made passing reference to this, but it was mainly left implicit. There was a good range of examples in the programmes though, from theatrical and game-based storytelling to cello playing to amazing 'Digital Duets' between artists in Manchester and New York. My one conclusion about this was that we need to widen our definition of Art to actually do this, to make Art a driver of change and energy in society in the way steam was.