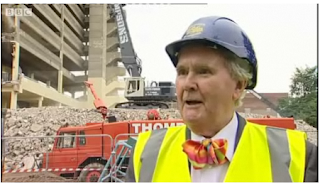 I remember two meetings from my first week at Northern Arts in May 2000 very vividly. One was with Mary Briggs and Elizabeth Hammill, two inspired and inspirational women who had a vision of creating a centre for childen's literature in Newcastle, and to collect illustrations and manuscripts relating to children's books. They had a cubbyhole of an office, much experience of being patronised, but a fierce determination. Their annual grant from my department (I had just become Head of Film, Media and Literature) was £8000 per year. Ten years later, Seven Stories, the national centre Mary and Elizabeth created, is coming up to its 5th birthday and a thriving place working on accredited museum status and other developments - although not without challenges as a result of that success, and the current funding environment.
The other meeting I remember was at the BFI with the other heads of film in the ten Regional Arts Boards - this being a year before Gerry Robinson and Peter Hewitt decided to merge the RABS and the Arts Council of England into one organisation. The meeting was to discuss the approach to the then fledgling Film Council (before it grew a UK pre-fix, and after its various parts had come out of BFI and Arts Council). They were clearly insistent on taking film and media out of the regional 'arts' bodies and into standalone 'screen agencies' which they would fund. At the end of the meeting, the chair of the meeting shared his current reading, suggesting it might be instructive for the group. It was Anthony Beevers' book Stalingrad.
Today's announcements by DCMS about arm's length bodies suggest that the particular quangic realignment I subsequently spent a year doing, which involved merging two organisations and half my own department into Northern Film and Media (in which I was only being saved from redundancy myself by a job coming up in the afore-mentioned merging of RABs and ACE) was a mere bout of fisticuffs compared to the heavy shelling and demolition going on now. The UK Film Council and Museums Libraries and Archives Council are to be abolished, alongside some other other mergers and reviews.
There are many implications of this, of course. It is clearly driven by a macho and misplaced cost-cutting and 'efficiency' agenda, that refuses to heed to logic, even where it means putting things back together once rent asunder (the lead for film seems to be heading back to BFI, for instance even though they have moved on in the last 10 years) or things which have restructured and refocused very radically - within the last two years in MLA's case. This is worrying for the Spending Review. It also comes alongside other abolitions: of the regional development agencies and the regional government offices to name two bodies which certainly played a huge part in the cultural regeneration of North East England. This is a huge amount of expertise to be lost in a short time. Other things logically start to fray, too - such as the partnerships of agencies brought together after the Hodge Review abolished regional cultural consortia. The practical implications will take time to work through. Most urgent, given the closure next month of the consultation, is consideration of issues of lottery distribution. How might that be best configured to enable investment into quality cultural activity and resilient organisations and ways of working?
My concern is that this feels like a list of things I've helped build being torn down in the wake of these cuts. (Though painful at the time, I do think Northern Arts losing film was a good thing ultimately, and Northern Film and Media a great success under Tom Harvey.) However, I am reminded of the interview I heard this morning with Owen Luder, the architect of Gateshead's famous 'Get Carter' car park, demolition of which began this very day. although obviously saddened, and seeing alternatives, he ultimately accepted that change sweeps most things away. (That's him in the photo above.) Maybe my point is change, the adaptive cycle and that things must continue to be built against the odds - in the way that Seven Stories was.
The important thing is that what follows can work. I would be the last to say the current infrastructure was perfect, and we shouldn't let resistance to cuts blind us to the redesign opportuity/challenge presented by these moves. I wouldn't want to worry the good folk of Audiences North East by reminding them of my role in setting it up, but one of the key things I argued for was that it would work across 'arts' , 'film', 'museums' and much more - because potential audiences didn't recognise those boundaries. It was a battle persuading some people, to be honest - and did mean closing another organisation. But it's worked, and ANE is a strong organisation with a growing membership. Could that approach be built on? Similarly, many creative people find it hard to draw a clear line between 'film' and 'moving image', and many galleries are full of video work. Can the sector(s) 'crowdsource' any strategic gaps, for instance? How do we work with local government, who could play an increasingly vital role as regional layers are stripped out, despite their own resource challenges?