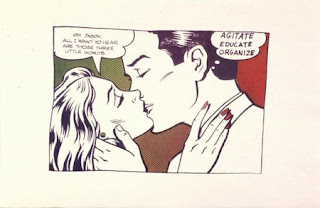 There is understandably and rightly a lot of nervousness in the arts about what the Posh Boys Coalition will be announcing about budget cuts to the public sector. There's also a more general nervousness where I live in the North East, due to a coincidence of what you might call 'risk factors': a relatively high proportion of jobs being in or paid for by the public sector and next to no Tory or Lib-Dem MPs meaning there is little for this coalition to lose in hitting the region hard. They have some history of that, although it is also true that Mrs Thatcher had a bit of a revelation in Thornaby, on land you can see from my office window. Shall I point out that the proportion is high not simply because of any distribution of funds/jobs by the New Labour government but because of the huge losses of the traditional industries, especially during the years the last Tory government was in power? No, you remember that, I know.
But perhaps you don't. You may have the good fortune of being too young or too forgetful. I've spoken to several people in the last fortnight who are wondering what it feels like to work under a Tory administration. Not all young people either... However, one of the few advantages to being 45 is a bit of historical perspective, something which as my last post suggested I think has been a bit lacking in the comments about likely cuts to the arts. So at the risk of making myself seem old, here's a few things to remind ourselves about,whatever George Osbourne says tomorrow.
1. Government support helps the arts, and definitely helps all kinds of positive developments. But it's not a pre-requisite for making things can have impact and quality. You don't need permission. They are only the government, they're not in charge of us.
2. Retaining investment in the really developmental activities will be key - that's going to require a bigger conversation than we've grown used to, one where we really debate the relative benefits of, for instance, more/bigger arts activity, targeted arts development or building key organisations that can then sustain healthy activity.
3. Cuts will not be fatal to the arts sector, no matter what pain or damage is involved. The arts are not for any government to kill, though they can definitely limit and misshape them. We might have some impairments, but can still be productive.
4. This government's policies, like those of previous Tory administrations, will also hold opportunities for the arts. The Big Society strategy could create opportunities for new organisations, or for organisations to deliver services in new ways. A policy emphasis on localism will open up new spaces for developing engagement in the arts. Many of the best arts organisations around today have their roots in the 80s, and were supported by things like YTS, Enterprise Allowance and other schemes. The 'culture-led regeneration' in the North East that has had so much global attention may be classic new labour in many ways, but it began deep in the Tory years, and had support from all parties, albeit in different ways.

5. The arts are part of politics, not something that have politics done unto them. That can manifest itself in lots of different ways, including a rejection of 'engagement', of course. But we can use our undoubted influence, visibility and connections now in a way which was perhaps not the case in the 1980s. I would suggest the arts are in a much better position than they were then to deal with a much less malign threat. We are better spread throughout society, we are much more diverse in our roots and ways, our funding is better spread, and we are even more ingenious. And these cuts, if they come, are less ideologically driven, more simply about balancing the books.

6. My final thought is that the arts leadership now is also of a different generation than was the case in the last era of dimished funding. This will have pluses and minuses. The last of the babyboomers and the oldest Gen X-ers mix with some fantastic digital natives for whom some of the above sounds like remembrances of Keir Hardy. We have to draw on both the experience of building great things in difficult times, and the expectation built up during the credit card boom years, to create a new approach that can sustain us through whatever difficult days are to come. Those brought up on the politics-lite of the last 13 years may need to pay a different kind of attention than so far.